The quick thinking and bravery of a Mercy College student has saved a man’s life and earned the year 11 student praise from his work colleagues, school and wider community.

Dion Emin (16) was awarded the Mercy College Ursula Frayne Award – Justice and Compassion for his courage and strength of will in acting out the College’s community values beyond the school grounds.

In November, while at his work placement at Cafe Bellavista in East Perth, Dion used quick thinking to help save the life of a man who collapsed outside café with a knife lodged in his chest, covered in blood and struggling to breathe.

Restaurant manager Alfredo said Dion alerted workmates and found a cloth to bind the wound while the man was put in the recovery position.

“He did a great job, he’s definitely the hero here,” Alfredo said. 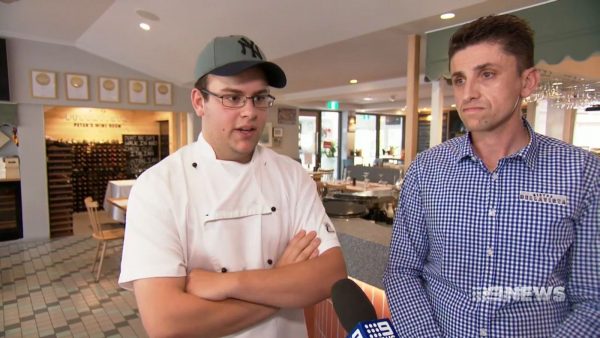 Dion Emin is interviewed for Channel 9 News after helping a severely injured man.

A student at Mercy College since Kindergarten, and the College’s first school-based apprentice, Dion has grown into an exemplary role model for his peers.

He was the recent recipient of the Mercy College Apprenticeship and Traineeship Trainee of the Year Award and was part of the 2018 Hospitality Group Training Youth Skills Showcase that saw him present dishes to industry, education and community members.

College Principal Julie Hornby said Dion had shown extraordinary leadership and courage and she was very proud of him.

“Dion has shown that he has the ability to act upon our values beyond the school grounds,” she said.

“He demonstrated what Jesus would have done, and regardless of any judgement, he proceeded to help save a person’s life, recognising that the value of human life is intrinsic, as it derives from God, who made human beings in his own image.

“Dion’s actions are an example of showing ‘Love in Action’, in acting to save the life of another and therefore carrying our Mercy values into the wider community.”