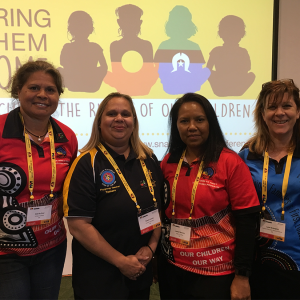 The conference was an opportunity for the AFaFE staff to meet with and hear from policy makers, researchers and representatives from organisations involved in care and education of Aboriginal and Torres Strait Islander children. The program included a presentation from CEWA educators on ‘Community Collaboration for Early Intervention’ in the form of their AFaFE playgroups, with staff detailing how they operate the groups at Star of the Sea Catholic Primary School in Rockingham, St John Bosco College in Piara Waters, and St Mary’s College in Broome.

The presentation generated interest with the audience, sparking conversations between AFaFE staff and other delegates, and resulting in some positive feedback for the presenters.

The AFaFE project began in 2015, and now consists of playgroups for young Aboriginal families at 14 school sites across the state, from Albany, the Perth metropolitan area, and the Kimberley region.

AFaFE groups currently have 238 children and 189 adults attending, and aim to improve readiness for and engagement with school communities for families involved.

The project has already demonstrated improved school attendance for older siblings, better relationships between school and parents, and new training and employment opportunities. There are currently 29 Aboriginal people employed within the project, with four AFaFE parents now trained through CEWA and the University of Melbourne, and working in the program.