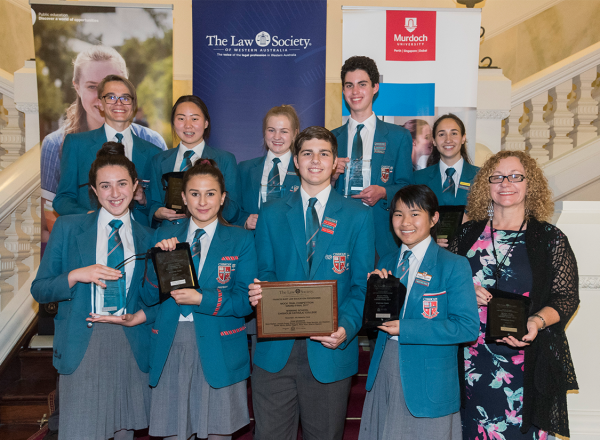 Chisholm Catholic College reaffirmed its strong showing in this year’s WA Law Society Mock Trial competition by winning the Grand Final of the 2017 championship. Significantly this is the second year in a row that the College has prevailed and won the competition, adjudicated by The Honourable Chief Justice Wayne Martin at the WA Supreme Court.

In the final decider held against Presbyterian Ladies College, Chisholm prevailed by the narrow margin of two points, interestingly having accounted for the second PLC team during the semi-finals. One hundred and twenty-six schools competed from the beginning stages in the elimination competition. With an almost completely new team of students from 2016 Chisholm defended a criminal case of a student accused of cheating by stealing answers to a WACE examination.

Ms Natasha Clark, Chisholm Catholic College’s Politics and Law Teacher and Mock Trials Coordinator was “proud of the team for their achievement, but especially for their dedication, preparation and most importantly, their great work on the night”. Each school team was encouraged to use the expertise of a lawyer coach and Chisholm Catholic College this year drew on the expertise of Ms Hannah Peters at Corrs Chamber Westgarth, in the Perth CBD. During the announcement of the winning school, Ms Clark recounted the Chief Justice’s important message to the students present that “a competition like this develops skills that will tide them well in the future, whatever path they take”.