Grace Forrest’s passionate views on modern slavery were the cornerstone for her morning plenary address and later panel session at the Australian Catholic Youth Festival today.

Walk Free undertakes research to uncover and ultimately tackle the problem, including robust solutions at a country level.

She does this by working closely with political, business, religious and community leaders to drive change.

They took the audience through the realities of modern consumerism and the supply chains that enable the exploitation of vulnerable people, including children, across the world.

Stella explained how one of the most popular foods on the planet, chocolate, is also one of the worst contributors to modern slavery.

She said 60 percent of the world’s cocoa beans are grown in Ghana and the Ivory Coast in West Africa, and it passes through many hands before ending up as a chocolate bar in the shops.

The process begins with small-hold farmers who pass the beans on for grinding and trading, the powder then reaches the manufacturer to be made into chocolate and is eventually sold by retail.

“The problem is that many farmers are so poor that often many resort to pretty bad labour practices,” Stella said.

“Poverty is a major root cause of persistent forced labour.” 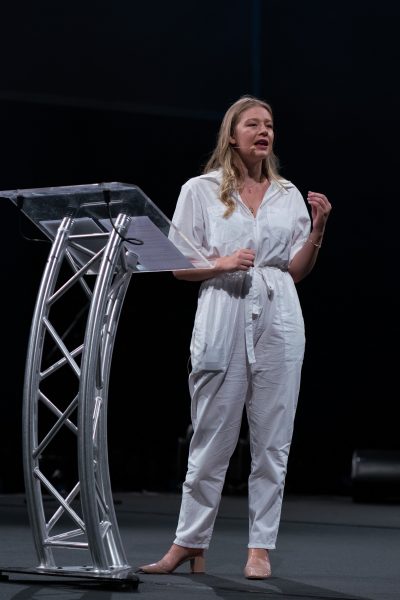 “Most products you can buy and consume every day . . . it’s especially those products that have very long supply chains that reach all over the world and are particularly at risk.”

Grace continued the conversation, saying it was “crazy” that the people who produced the products and had the highest risk in doing so, earned the least money.

“There is a need for a global economic shift around basic fairness,” she said.

“Slavery is one hundred percent a man-made problem,

“Ethical should not be a choice.”

She urged festival goers to research and choose ethically produced products and use social media to publicly shame brands that did not have ethical practices.

“Cultural change does take a long time, but it can also happen really quickly and what accelerates that, what lights that fire, is people speaking up and people understanding the consequences of our actions every day,” she said.