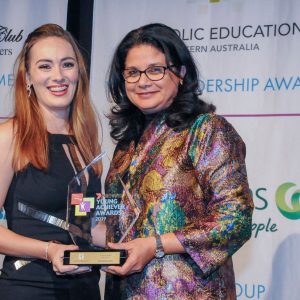 Noongar lawyer Krista Dunstan has been named as the 2019 recipient of the Catholic Education Western Australia Young Leadership Award.

A rising star in WA legal circles, Ms Dunstan was presented with her award at the annual Seven News Young Achiever Awards WA on 25 May.

The senior public servant was commended for the leadership she has shown in developing the policy and practice of organisations to improve access for Aboriginal Australians.

Ms Dunstan has worked tirelessly to develop better outcomes for her community and through courage, knowledge and determination has become an outstanding positive role model for young Aboriginal people.

She was inducted into the Western Australian Women’s Hall of Fame in 2011 and awarded the Human Rights Awards Young People’s Medal in 2012.

Ms Dunstan is a board member of the Museum for Freedom and Tolerance (WA) and the Western Australian Aboriginal Advisory Council.

Other awards presented on the night included the Catholic Education Western Australia People’s Choice Award which went to human rights advocate Drisana Levitzke-Gray who champions the rights of deaf people and raises awareness about Auslan.

A founding member of Deaf Youth Australia and 2015 Young Australian of the Year, Ms Levitzke-Gray founded “Deaf Film Nights” in 2016, showcasing Deaf films, movies and documentaries from all over the world, providing the community members with the opportunity to understand and embrace their language, culture, community and history. 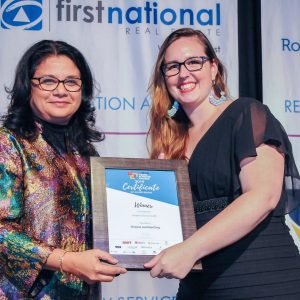