Staff and students at the school’s St Joseph Pignatelli Campus in Attadale rolled out the red carpet for Leigh Hobbs to officially launch Mr Chicken All Over Australia.

The event came about after Mr Hobbs told Mel Maria’s teacher librarian Elizabeth Martini he was looking for children to write letters to Mr Chicken inviting him to visit Australia, his next travel destination after Paris, London and Rome.

The students at Mel Maria were eager to be part of Mr Chicken’s latest adventure and sent him letters asking him to visit their favourite places in WA, including the school and even their homes.

“The real kids’ letters, a lot of them from this school, were so charming and funny they prompted the book,” Hobbs said.

When publisher Allen and Unwin chose 10 of the students’ letters, Mrs Martini invited Mr Hobbs to launch his book at Mel Maria.

“We were very excited when he accepted the offer and set about organising the event with the assistance of library supplier Westbooks,” she said.

The selected students read their letters aloud at the launch, and received a signed copy of the book.

Mrs Martini and the library staff dressed as characters from Hobbs’ book, and decorated the school with paintings, murals and even painted a giant map of Australia on the playground.

Mr Hobbs said he was touched by the effort.

“I had no idea that the school was going to make such big deal of it, which was lovely,” he said.

“[At] terrific schools such as this, I get a great experience because the kids are enthusiastic, and the teachers are engaged as well.

“Kids are innately good natured and up for fun and for me that is why I like writing for kids, because if you can engage them then they’ll follow you anywhere in a story and I find that quite affecting.” 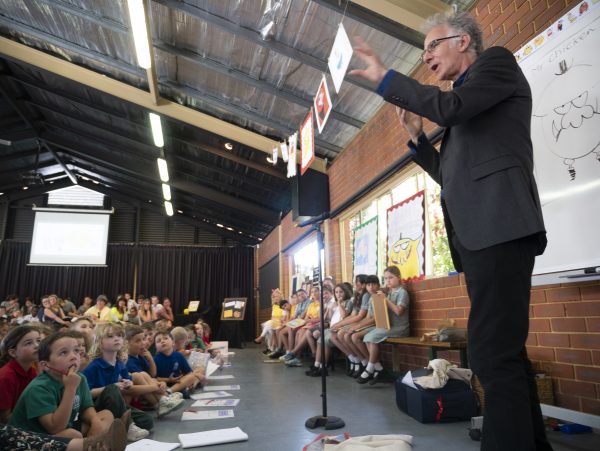 Mrs Martini said Mr Hobbs was very engaging for both the children and adults.

“It was a wonderful opportunity for our students to develop a genuine relationship with an author/illustrator and to hear how he goes about creating a story and the accompanying artwork.

“It was an outstanding community event that provided a wonderful opportunity for the children to have a window into Leigh Hobbs’ world.”

Mr Hobbs entertained the audience with drawing lessons and, in a rare occurrence, read a section of the new book to the children. 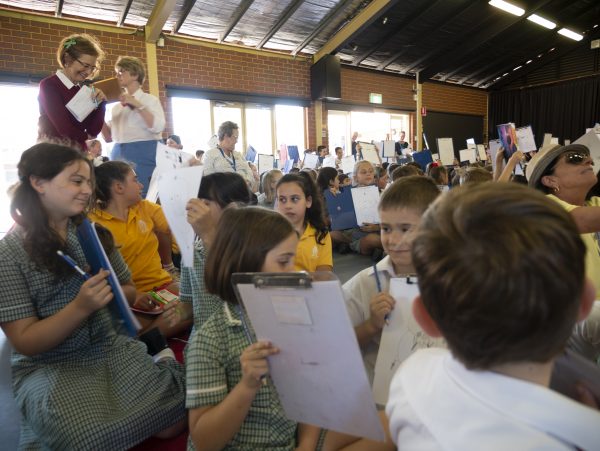 The Australia’s Children’s Laureate in 2016-2017 prefers not to do readings of his stories because he doesn’t want to influence the imaginations of the children reading them.

Mel Maria places great importance on its libraries, which are inviting environments that promote a love of literature, provide information and inspire children to become readers for life.

In addition to weekly library sessions, students may borrow as often as they wish and children and their parents are welcome to explore the library before and after school and at lunchtime.

Comments from students after the launch included:

“I felt we were very privileged that our school was chosen by Leigh Hobbs to launch his new book.”

“I loved learning how to draw Mr Chicken and the Marsupial.”

“Leigh Hobbs said all our drawings would be different because we are all different.” 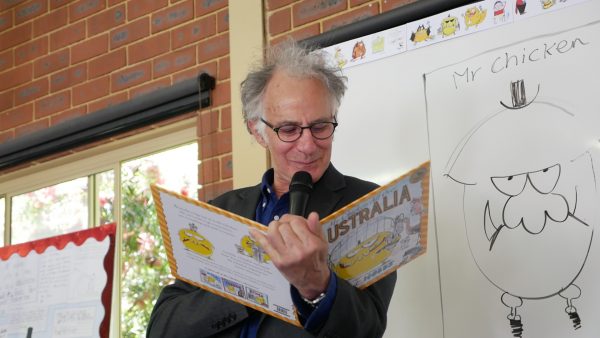