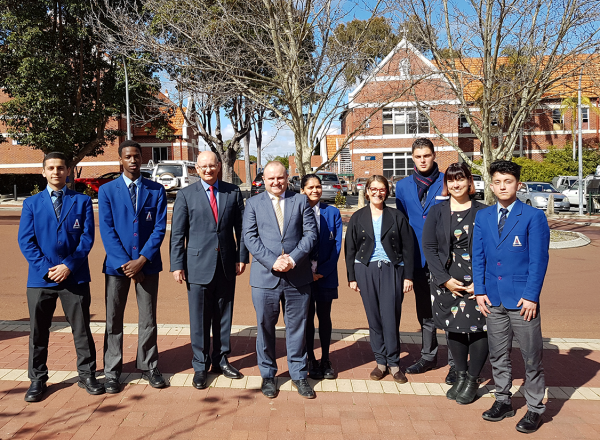 A group of Aranmore Catholic College students of diverse backgrounds discussed migration, citizenship and culture with Members of Parliament recently, when the College hosted the Perth sitting of the Federal Parliament’s Joint Standing Committee on Migration.

Students who have moved to Australia from Italy, Syria, Democratic Republic of Congo and Afghanistan, along with an Aboriginal student and the College’s Head of English as an Additional Language/Dialect, had the opportunity to speak with committee members Jason Wood, Maria Vamvakinou and Shayne Neumann before the public hearing began.

The students discussed their own issues, spoke about the importance of retaining first languages, and voiced their concerns regarding the Government’s migration policies and proposed changes to citizenship laws. The committee members then asked further questions and discussed possible solutions with the students.

The members congratulated the students for the maturity and resilience they demonstrated when responding to questions.

A Year 11 Religious Education class sat in on part of the public hearing which followed, which was attended by various community stakeholders presenting submissions to the committee. The importance of a feeling of belonging and the need to develop trust echoed throughout the student and stakeholders’ discussions.