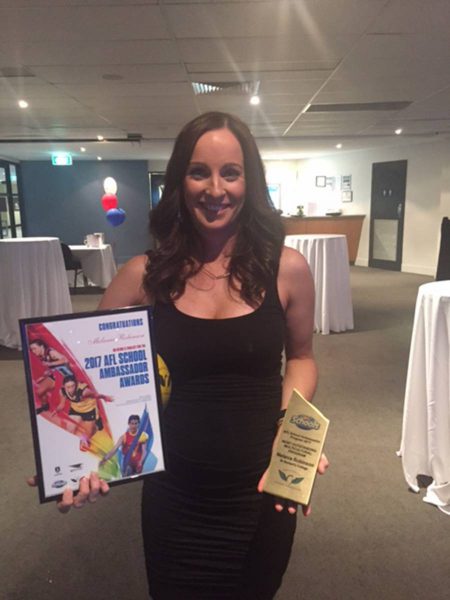 Congratulations to St Norbert College Head of Health and Physical Education, Melanie Robinson, who was recently recognised with an AFL Ambassador award for her outstanding work to promote Australian rules football in the school and school community.

Melanie received the award in the ‘Outstanding Multicultural Program’ category, for developing and implementing a program designed to give students from multicultural backgrounds greater opportunities to play Australian Rules football. She received her award along with five other recipients at the AFL School Ambassador of the Year Awards night, on 10 August at Domain Stadium.

Mrs Robinson said she was both surprised and thrilled to win the award.

“I didn’t know the awards existed and started the program purely for students to get more opportunity to play AFL,” she said. “The nomination was a surprise so winning was great.”

The program at St Norbert’s began three years ago and developed significantly in the following years.

“This year the program ran over five weeks in class time,” Mrs Robinson explained. “Each Year 7 class had one physical education period per week with the staff from the Nic Naitanui Football Training Program working on skills and game play.”

This year, the awards received a pool of more than 100 nominations, of which 30 finalists were selected.

The AFL School Ambassador (AFLSA) program has been running in schools for 12 years, since 2004 and aims to enhance education outcomes in literacy, numeracy, health and physical education by not only providing resources to schools, but also acknowledging and rewarding teachers who strongly promote football in their school and community. Nominations are accepted from school staff, community football groups and WAFC employees.

“It is another example of the dedication of the St Norbert College staff, including Melanie, to go beyond and excel in their efforts to be role models and to do all they can with the best interests of our students at heart,” he said.