Artwork commemorates the life of Irene McCormack at Catholic College 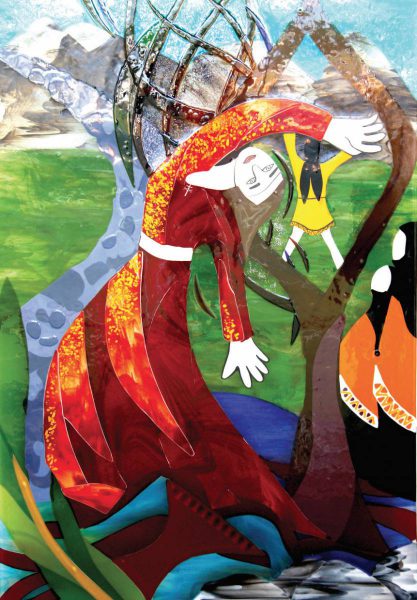 Resurrected Irene II was commissioned by Irene McCormack Catholic College in January 2016. Considered as an important visual, tactile representation of Irene, the artwork is rich in symbolism and represents Irene’s eternal journey.

Irene’s family and the Sisters of St Joseph believe it is a wonderful testament to Irene’s life and work to have Irene McCormack Catholic College, Butler, named in her honour, and an artwork created to represent her faith and her vocation in life to serve the poor.

The artwork process began in 2004 when the Sisters of St Joseph commissioned Rose Reilly to create a memorial artwork in memory of Irene. The work drew on symbolism and metaphor to represent the many facets of Irene’s life and her work as a teacher and missionary. The original Resurrected Irene was completed on 21st May 2007 and is exhibited at the Mary McKillop Centre, York Street, South Perth.

Resurrected Irene II was constructed as a large architectural kiln formed glass panel. The fusing of the glass components creates a contemporary image, reflecting the modern design of the Paul Rafter Centre. This artwork intends not only to remember Irene and represent her symbolically, but to help us to never forget her and the many people in the world who suffer injustice.

Resurrected Irene II, was blessed on 30th June 2016, by the Auxiliary Bishop of Perth, Most Reverend Donald G Sproxton DD VG. During the blessing Bernadette McCormack, Irene’s sister, placed the emblem of the Sisters of St Joseph on the red dress symbolising the Habit.

Resurrected Irene II was a gift to the College through the generosity of the McCormack family, the Sisters of St Joseph of the Sacred Heart, Irene McCormack Catholic College Parent Group, Ian Dixon from Perth Art Glass and the passion and creativity of Rose Reilly.