Travelling for seven hours to get to a sports carnival might seem excessive for people living in the metro area, but for country schools it’s the norm, journeying to Perth several times a year for sports and other events.

John Paul College (JPC) in Kalgoorlie is one such school, located 600km from Perth in WA’s Goldfields.

The school sends teams to Associated and Catholic Colleges (ACC) sports carnivals for swimming, cross country and athletics.  According to John Paul College staff member, Liz Parker, it’s an opportunity not to be missed. 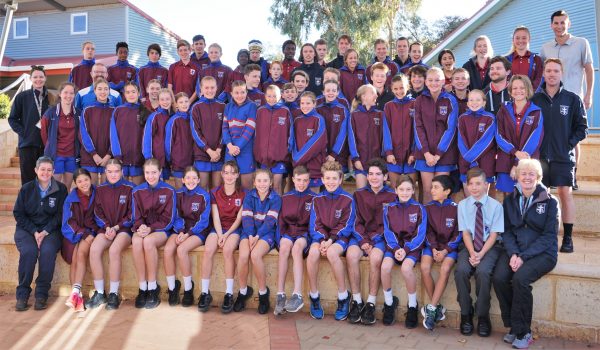 “Attending the ACC Carnivals has a lot of benefits for the personal growth of our students, and it also gives them the opportunity to compete in a much bigger sporting arena,” John Paul College staff member, Liz Parker said.

The only setback is the tyranny of distance and fatigue.

“We travel by bus for seven to eight hours, leaving Kalgoorlie at 7:30am and arriving in Perth in the afternoon,” Ms Parker said.

“The early morning start, excitement of the trip and long bus ride would affect anyone, but our students prove that they have the stamina and determination to compete.

“We punch well above our weight and this also goes for our dedicated PE Staff at the College.”

John Paul College sent a team of 60 students and four staff to the ACC cross country carnival in June and finished an admirable 28th out of the 76 schools entered.

“It can be cold at that time of year and students bring their swags, sleeping bags and pillows with them,” Ms Parker said.

On arrival there is time for a shower and change and the students are treated to a meal and movie before settling down for the night.

“We are thankful that Trinity College allows us the use of their gym as this is a saving on the overall cost of the trip for students.”

“We do this for each of the ACC Carnivals – Swimming, Cross Country and Athletics,” Ms Parker said.