Year 4 students from Padbury Catholic Primary School last month presented a fascinating exhibition of their work to peers, parents and teachers, based on extensive research into the histories of Aboriginal peoples.

The work was a showcase of an integrated learning unit based on this year’s NAIDOC Week theme: Voice. Treaty. Truth.

Teachers Deb Barry and Megan Woodall worked in collaboration with the school’s Music, Science and History specialist teachers to create a truly integrated experience for students.

In English, students used educational resource Our Land, Our Stories to learn about different aspects of Aboriginal peoples’ histories and cultures.

Students created their own Dreaming story and wrote persuasive texts after researching current issues from an Aboriginal perspective, including arguments for changing the national anthem. 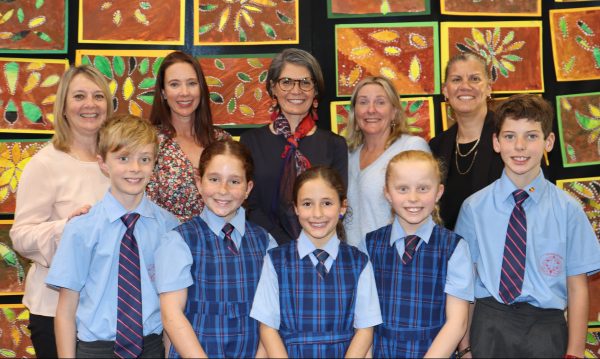 In History, students learned about the use of agriculture, aquaculture and the impact of British colonisation on Aboriginal peoples’ ways of life.

The exhibition was a resounding success, with parents and friends invited to view the students’ work, along with their schoolmates from other year groups, and Sharon Davis and Isobel Bevis from CEWA’s Aboriginal Education Team.

“It was the best practice in embedding Aboriginal perspectives across the curriculum that I have seen since I started at CEWA in 2015,” she said.

“We are so proud of what your school is doing, moving beyond the Aboriginal Education Improvement map and taking a leap of faith in the Perspectives Priority area.”

In wake of resounding inaugural success, Mrs Barry and Mrs Woodall are looking forward to developing the exhibition to include more year levels at future events.