Peter Bol graduated from St Norbert College in 2012. A College House Captain, he won the 800m event at the 2012 Inter-School Athletics Carnival. Now 27 years old, Peter is representing Australia in the 800m event at the Tokyo Olympics. He has sensationally set new national records for the distance twice, first in the heats and then in the semi-final, as he qualified for the medal-deciding run coming up this week.

The following story is republished from St Norbert College, who brought it out of the archives as Peter takes on the fastest in the world. Written in 2013 by Mr Brian Moore – father of then St Norbert College teacher Helen Leahy – it explains how Peter took to the track for the first time at the college and never looked back. It is followed by a Q&A with Peter at the time, and the speech he gave to students on a visit to the College in 2016, after he competed in the Rio de Janeiro Olympics.

This is a short story about a young Sudanese athlete named Nagmeldin (Peter) Bol who came into my life in October 2010. It is a short story because it has a beginning but no end. It’s only just the start.

My daughter Helen was Head of House at St Norbert College and was struggling to fill all events for the Interhouse Athletics Carnival. She needed middle distance runners, when one of the students told her: “Peter Bol can run, Miss”.

“Really? Can you go and get him?” was the instruction.

When a very hesitant Peter stood before Helen, she asked him if he could run.

“That’s once around the oval.”

Well, he ran so fast and beat the others by about 80m. Then Helen said to him: “How about twice around the oval?”. He won by at least 100m!

Shortly after, Helen approached me with the story of this boy, and because she knows her sport, I listened. Peter came from a large migrant family and did not have the support base to improve his running, i.e. he needed some support and would I assist? In addition, in Helen’s judgement, he was a fine boy deserving of help. I thought hard and long about the consequences and implications of becoming involved and said I would assist financially but I needed to meet his parents first and talk it through. This we did one Saturday in November 2010. We met with all of the family and his parents were supportive as well as being lovely people. I pointed out that my involvement was because Peter was a fine young man not necessarily because he could run.

And so we got under way. We purchased two pairs of spikes and luckily there was a family at the College named Ben Catley who were good athletes and being coached by their father Bernie who was an accredited coach with Westrack Athletic Squad. Peter joined the squad, began training, became a member of Athletics WA and began to run at their weekly Friday night meets. With coaching and exercises he began to run Personal Bests nearly every week.

So we move to March 2011 when I received a telephone call from Athletics WA saying Peter had been selected to run in Sydney in the Australian Junior Championships but they had received no nomination, nor was he booked on a flight to Sydney. He also needed his accommodation, transport and WA outfit paid for. Panic set in, but we arranged everything and off he went to Sydney entered in the 800m and 1500m Under 18. He won his heat of the 800m, so the coach scratched him from the 1500m in the hope that he could win a medal. Unfortunately in the final, he was elbowed out of his lane and was disqualified. He finished fourth.

2011 and 2012 have been great learning years for Peter and he has continued to improve his times and stamina. As a junior he has won the 400m, 800m, and 1500m, each year running personal bests almost every meet. He didn’t compete in the Australian Championships in 2012, preferring to concentrate on his studies. He subsequently passed his TEE Exams and has now commenced studies at university.

During 2012 there was a tentative approach from a US college regarding a scholarship, but I felt it was heavily weighted in favour of the college, didn’t offer Peter very much and besides, he didn’t really want to leave home.

Last week (at the time of the article) the Australian Junior Championships were held in Perth and Peter was entered in the 400m and 800m Under 20 men’s championships. He was disappointed with his run in the 400m and finished 4th in the final. Then in the final of the 800m he ran a wonderful race, led from start to finish in the Australian record time of 1m48.9secs, in what has been described as the run of the meet. He is now ranked 3rd in the Open Class in the 800m and will compete in the Australian Open Championships in Sydney in April. He has also been chosen by Athletics Australia to travel to Italy and Germany for training experience and racing in July (Matrix Development Squad). When he returned to the grandstand where my family and I were waiting there was great jubilation!

Helen and I have great satisfaction over Peter’s rise as an athlete and person. As Peter and I hugged each other and he took off his medal and handed it to me, I said “Peter, it’s just the start”. He smiled back and said: “It’s only just the start”. 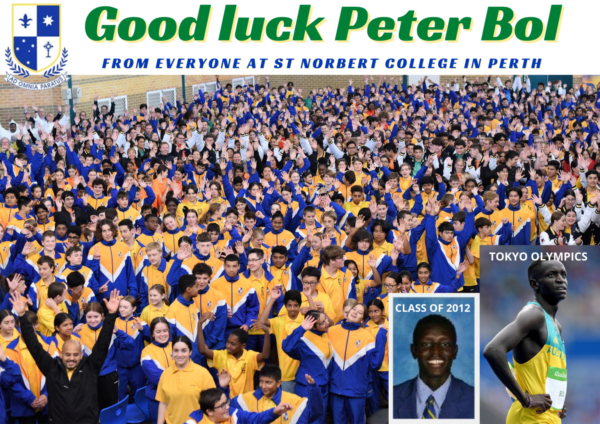 I first arrived in Australia in 2004 in Queensland where I first lived before moving to Perth, It was all great starting primary school and learning English was all fun! When I arrived in Australia it was a whole new culture with so many differences, but after a while we all got used to it and loved the country!

Starting St Norbert was one of the best decisions as it has given me so many opportunities, so many different sports, activities and leadership positions. I was introduced to athletics carnivals at high school level, which were much better than primary school! It was great running at school carnivals and seeing everyone get it to it. However, I never thought I’d be competing for the national title of Australia a few years later, because who runs for fun? That was my thoughts but when I started with the help of Helen Leahy and Brian Moore I really started to enjoy the sport because there was more to it, it wasn’t just once a year thing but training daily and competing on Friday nights. I really started becoming a student of the sport and following Aus rankings and WA rankings and dreamt that one day my name will be on the top! But I knew it wasn’t going to be easy and it was no longer about talent but hard work was the only way to get there! I’m so grateful for Brian Moore in assisting and taking care of all the athletics trips, meets and also in coming in and watching me run at major events with his family

I’m really happy with the way I’m going today, just recently started my studies at Curtin University (Bachelor of Science in Construction Management and Economics) and also been approved for the Elite Athlete Program with Curtin which will help me balance sport and studies!! My parents are so proud both in my schooling and Athletics and the motivation to continue doing well really comes from them, seeing them proud and smiling over my achievements motivates me to do more. 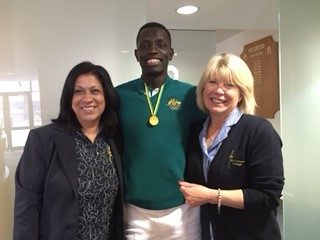 The following speech was delivered by Peter Bol to St Norbert College students and staff when he returned for an assembly after competing in the Rio Olympics in 2016:

“Imagine working hard towards a dream that no one sees, making sacrifices that people don’t understand, going through roads no one else would and after five years the dream becomes a reality”.

Good morning to all staff, students, parents and (his former House) Prémontré .  It is a blessing to be here with you today.  For those who don’t know me, my name is Peter Bol and five years ago I was sitting where you a sitting right now.

As most of you would know last month the Olympic Games took place in Rio, Brazil and I had the opportunity of representing Australia in the 800m.  Being an Olympian has been my goal for 5 years and you can imagine the excitement and emotions of reaching a long term goal.  As most of you would know while possible, being an Olympian is no easy task and there are no process or procedures you can follow that would guarantee your selection.  I personally followed three steps that I believe guaranteed my selection in the Australian team, which are faith, having a strong support team and enjoying the process.

To be selected to represent Australia in an event such as the 800m you need to be in the top 3 runners in the Country.  One of the most important elements in achieving a goal is to have faith and confidence that within time and patience you can be the fastest in the country.  I personally had faith that “God would never let me dream a dream that I couldn’t handle or achieve”.

One of my favourite African proverbs is “If you want to go fast go alone, if you want to go far go together”.   I truly believe I wouldn’t be where I am today or have achieved half of the accomplishments I’ve achieved without my family who have been my support always and during the most difficult times, my mentor, friend and biggest supporter Brian Moore who shared the same vision and showed the highest interest, to Helen Leahy who I’m forever grateful to have had as a teacher and role model guiding me towards my talents when I didn’t see them, and to all of you at St Norbert College for the encouragement.:

Most importantly enjoy the process.  Literally everything that comes along the way, the good and the bad.  I can truly say running is my passion and regardless of what results and outcomes I will always enjoy it.

I would like to wish the ACC team all the best for the upcoming carnival.  Remember while we may be from different houses – We are going as St Norbert College.  Support each other where you can and enjoy it.  To all of the Year 12 students enjoy your final months and all the best with the exams. Thank you.” 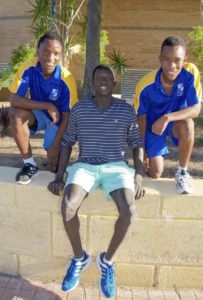 Peter Bol, centre, with two students during a visit back to St Norbert College in 2016.