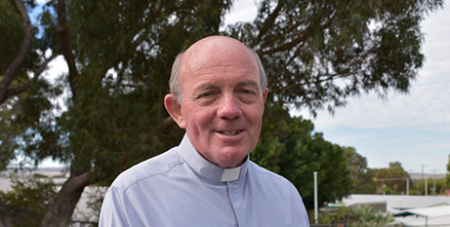 The Holy Father has this week appointed Fr Michael Morrissey, the Vicar General and Chancellor of the Diocese of Geraldton, as the ninth Bishop of Geraldton.

Archbishop Denis Hart, President of the Australian Catholic Bishops Conference welcomed the appointment, “On behalf of the Australian bishops, I join priests and people in welcoming Fr Michael Morrissey as Bishop of Geraldton. He has long priestly experience of Geraldton and already has been involved with so many people young and old.”

“Fr Michael is a worthy successor after the twenty-five year term of Bishop Bianchini who has governed the diocese with so much love and care. We wish him many years of Gospel service as the new bishop.”

The Bishop-Elect said his appointment recognises “all those small communities scattered throughout the diocese, including Yalgoo, my home town where I grew up on a sheep station”. Following in Bishop Justin Bianchini’s footsteps is very special, he said, after working closely with him for the past 25 years.

He has been a long standing member of the College of Consultors, from 1991 to present, and the Presbyteral Council, 1983-1998, 2003-present, which he chaired between 1994 and 1996 and between 2004 and 2006. Since 1983, he has been Senior Chaplain of the Army Reserve Second Division. In 2015, Bishop-Elect Morrissey was appointed as Parish Priest Representative to the Board of the Catholic Education Commission of Western Australia.

Catholic Education Western Australia welcomes Fr Michael Morrissey as the Bishop of Geraldton, and looks forward to supporting him in “continuing the legacy of Bishop Justin listening to the people and seeing where they would like to go in their faith and life.”

Pope Francis accepted the resignation of Bishop Justin Bianchini, who has been Bishop of Geraldton since March 1992. He has been appointed the Apostolic Administrator of the Diocese until Fr Michael Morrissey is ordained as the new Bishop on 28 June.