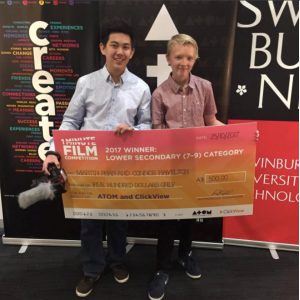 Congratulations to two Ursula Frayne students who have taken out first prize in the lower secondary category of the 1-Minute Film competition.

The 1-Minute Film Competition is an initiative of Australian Teachers of Media (ATOM) and ClickView. It provides Australian and New Zealand primary and secondary school students with the opportunity to make a 60-second short film or animation, and win fantastic prizes in the process.

Their film can be viewed at http://1-minutefilmcompetition.org/2017-lower-secondary-entry/past-present-future/