Karoline’s short story The Singularity earned her first place in the Lower Secondary category and the Subi Voice of Youth Award, as well as the title of Overall Winner of the Award for 2020.

The Singularity explores the idea of uploading a person’s consciousness to a database after their death, but with a focus on accepting the terms of such a transaction – judges called it “a mature and unique futuristic story that showed fantastic humour”. 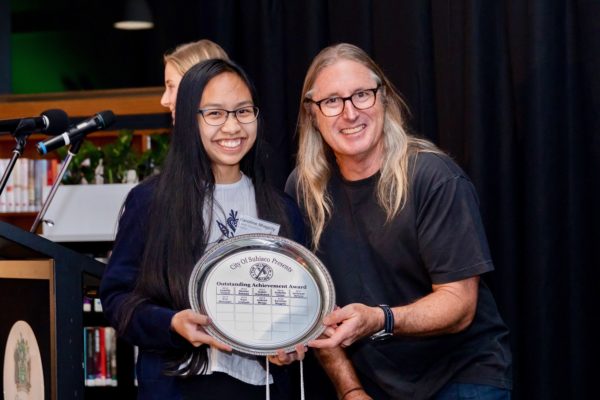 Karoline said “it still baffles me that I’ve won not just one, but three prizes. It’s completely and utterly unreal,”

“The best part was talking to the judges and hearing how it made them laugh and think and discuss with each other,”

Although Karoline clearly has a special talent for writing, she said she didn’t have concrete plans for her writing in the future.

“I’m just going to keep putting words on paper, try to breathe life on to a page, and maybe one day, I’ll capture another audience again,”

The annual Award is open to Western Australian school students, and this year received 1350 entries.

The presentation ceremony was held in October at Subiaco Library, with finalists and award patron, Tim Winton, in attendance.