Western Australia is fast becoming known for its sportswomen – Sam Kerr and the Perth Glory in the W-League, the Perth Scorchers in the WBBL and the Fremantle Dockers leading the charge in the AFLW.

The AFLW is now in its third season and like any elite sport, it draws from a strong development pathway to produce its athletes.

In WA this includes the Associated Catholic Colleges’ Freo Dockers Cups for Years 7 and 10, alongside season competitions run by the West Australian Football Commission.

ACC Girls AFL facilitator Suzie Ehlers said ACC’s carnivals for Catholic and independent schools started in 2012 with four Year 7 teams and had now grown to 18 teams from Year 7 competition and 13 from Year 10, with 85 per cent from CEWA colleges. 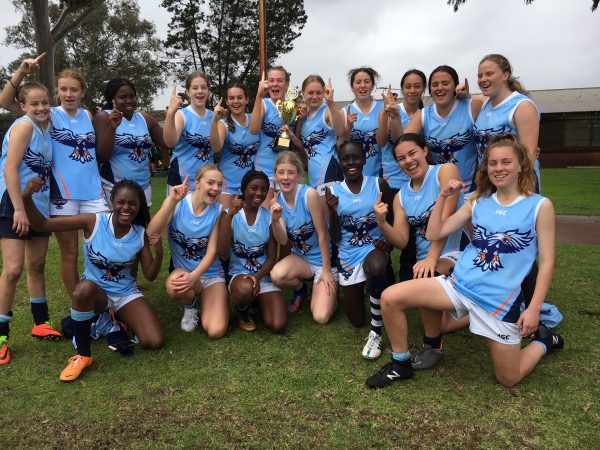 “The interest is phenomenal,” Ms Ehlers said, adding that she was not surprised the girls had embraced the sport because most boys and girls support an AFL team.

She said the physicality of AFL was no different to other popular girls’ sports like basketball, rugby and netball.

Newman College coach Lisa Webb said girls love the physicality and uniqueness of the sport with large ovals to run on and the ability to kick, handball, mark and lay tackles.

“The game is growing so fast it’s fantastic to see,” the Dockers’ assistant coach and 2018 Best Clubwoman said.

Much support has come from schools and teachers alongside the WAFC and AFLW increasing exposure of the sport, endorsing the ACC competition and sending talent scouts to finals.

Ms Webb would love to see the amount of competitions and opportunities for development continue to grow, with women eventually having the opportunity to play AFLW full-time.

“Girls are coming through from a young age now kicking the football and so you’re seeing girls who have been playing for five to ten years whose skill level is really high,” she said.

“At Newman the girls are developing their skill level so quickly and understanding strategies for the game, it’s great to watch.”