Kalgoorlie-Boulder’s John Paul College has champions in its midst, with a student and teacher recently recognised for outstanding contributions to the community, and sports teacher representing Australia in masters hockey.

As a volunteer Country Youth Ambulance Officer and volunteer Fire Brigade member, Riley was recognised for exceptional commitment to his community.

“His interest in mental health has led to him starting a school–based initiative to assist his peers with their mental health and wellbeing,” Mr Hall said.

“Riley displays a strong desire to help those around him and continues to contribute to the Kalgoorlie-Boulder community.” 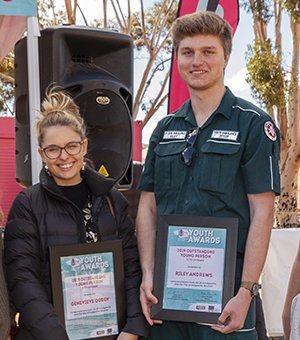 Music teacher Genevieve Ogden donates much of her time running a before–school jazz band as well as assisting with various school excursions, performances and competitions.

When noticing the lack of a violin instrumental tutoring program at school, she supplied five violins herself, designed lessons and organised volunteers to run the program once a week.

Miss Ogden’s efforts as a Youth Ambassador with the Goldfields Youth Ministry has seen her plan and fundraise to send 100 young people to the Australian Catholic Youth Festival held in Perth this December.

She also runs a weekly youth group, helps coordinate music during church services, and is a player in the Goldfields Women’s Football League.

“Miss Ogden is an example of an exceptional leader within our community, her selfless commitment to helping others and her contribution to young people’s lives is inspirational and she is a worthy winner of this Youth Award,” Mr Hall said.

City of Kalgoorlie-Boulder Chief Executive John Walker said the selflessness and commitment to community displayed by both young people was commendable.

“It’s fantastic to see two such community minded young people recognised as part of the inaugural Youth Awards,” he said.

“Riley and Genevieve are both incredibly deserving of this recognition, and I am sure that we will see more fantastic young people acknowledged in the future.”

In addition to the award winners, JPC’s Head of Health and Physical Education Judy Bailiff recently fulfilled a life-long dream by representing Australia in masters hockey at the Trans-Tasman Challenge.

“Wearing the Green and Gold has been an amazing experience and such a privilege,” she said.