The online learning platform is used by over 300,000 students from 1,000 schools around the world, and each year holds the Education Perfect World Series, an online competition in which schools compete in Social Sciences, Languages, Maths, English and Science events.

This year, more than 70,000 students from Years 7 to 12 competed globally. MCC student Brentley Rutherford (Year 9) came 114th answering 10,438 questions correctly in a week, and Nayan Chamoli (Year 8) came 139th having answered 10,168 questions correctly within the week. They both earned Elite awards for their placings.

As a result, Mandurah Catholic College is currently positioned 62nd globally out of 1,281 schools in the Education Perfect championship.

Open to Year 8 and 9 students in both Australia and New Zealand, students were required to use materials supplied by Aurecon to design and construct a model bridge according to specific guidelines.

Judging took place in August, with bridges being tested for visual appeal, workmanship, creativity and functionality, and prizes were awarded in four award categories: All-rounder; Efficiency; Strength and Innovation, and a Digital award for the best digital wireframe design for strength.

Following a successful testing of the MCC team bridges at the intra-school competition, two teams of Year 8 Science Extension students competed in the Competition at Scitech on 11 August. Both teams did an incredible job, with one of the teams consisting of Joel Smith, Jake Henderson and Isaac Moore (pictured) winning the Innovation Award and $500 for the College. Well done to all involved – an amazing achievement! 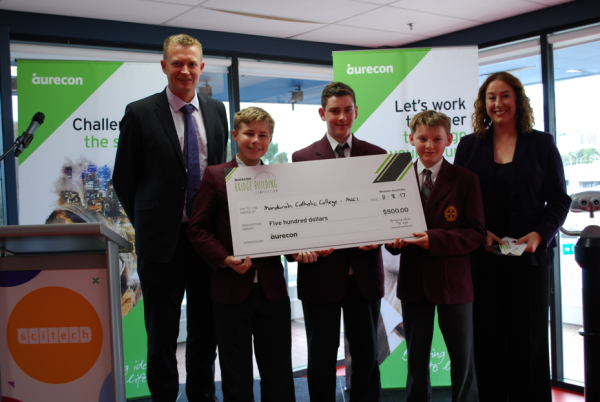