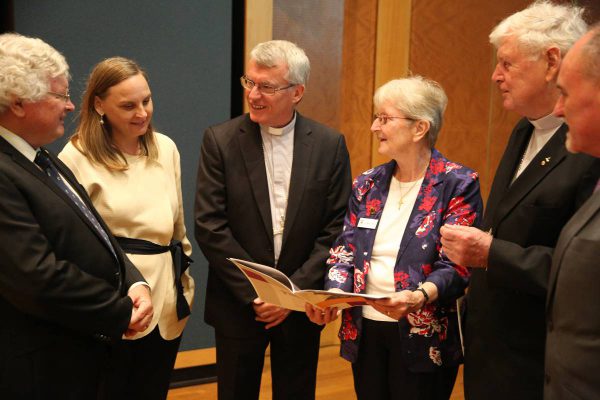 Catholic education leaders discuss A Framework for Formation for Mission in Catholic Education at the document’s launch in North Sydney on March 20.

Catholic education leaders have gathered in North Sydney to celebrate the launch of a new National Catholic Education Commission resource to support the formation of the more than 90,000 staff working in Catholic schools and Catholic school systems.

In his foreword for the document, Archbishop Costelloe spoke of the central importance of God in people’s lives and especially in the lives of those who work in Catholic education.

“Because it is our firm intention to educate the whole person, and because we believe that education is for life and not just for a job, we also acknowledge and insist that an education which sidelines or excludes the mystery of God from consideration is an education which can only ever be less than complete,” he wrote.

“By leaving God out of the process, we are indeed selling our children and young people short and leaving them with a limited and distorted understanding of what it means to be a human person living his or her life to the full.

Archbishop Costelloe said A Framework for Formation for Mission in Catholic Education helps those working in Catholic education understand the “awesome responsibility” they have accepted.

Catholic educators from across the country who sit on the National Catholic Education Commission’s Faith Formation and Religious Education Standing Committee prepared the framework on behalf of the NCEC. The Australian Catholic Bishops Conference has endorsed the document.

NCEC acting Executive Director, Danielle Cronin, said the framework is designed to complement the efforts of schools and school systems in continuing the 200-year history of Catholic education in Australia.

“We know that many great programs and practices are already in use, which is why we sought the wisdom of people from across Australia to develop this framework for assessing how the existing initiatives are meeting the needs of schools and systems today and how they can be developed further,” Ms Cronin said.

“Ensuring our 1,737 schools continue to be places in which the Catholic faith and tradition are embraced and enhanced will mean they continue to be schools that increasing numbers of parents are choosing to educate their children academically, socially, morally, physically and spiritually.”